Subtitle: Simply Making a Mess of Everything

# Getting Started with Pluto

Pluto is a notebook environment for Julia. Install Julia and start it to get a command window. The first step is to add some packages we’ll use for this project. Type “]” at the prompt (without the quotes) to enter the package manager. The packages you’ll need are:

It may take a few minutes as Julia checks and downloads all necessary dependencies. When everything has finished, type “Ctrl-C” to exit the package manager. In the Julia command window, type “Using Pluto” followed by “Pluto.run()”: 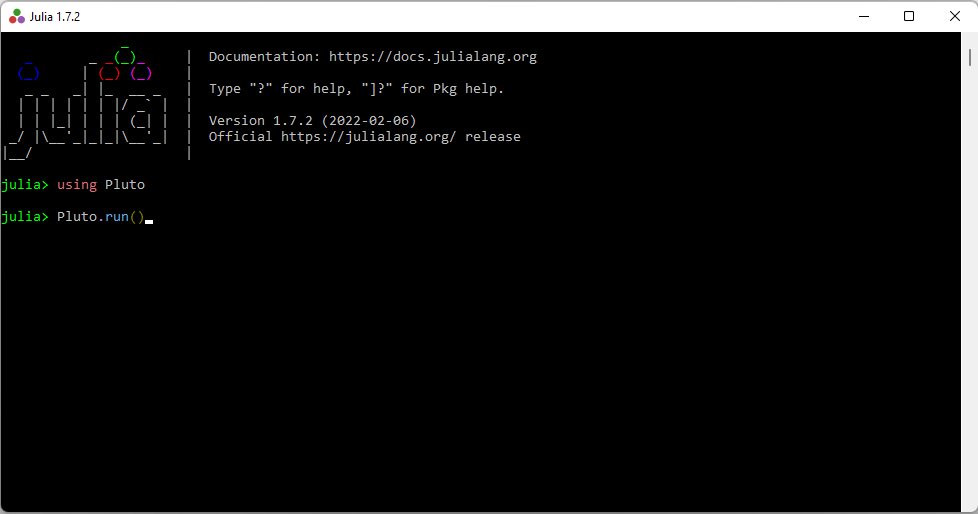 A new tab will open in your browser: 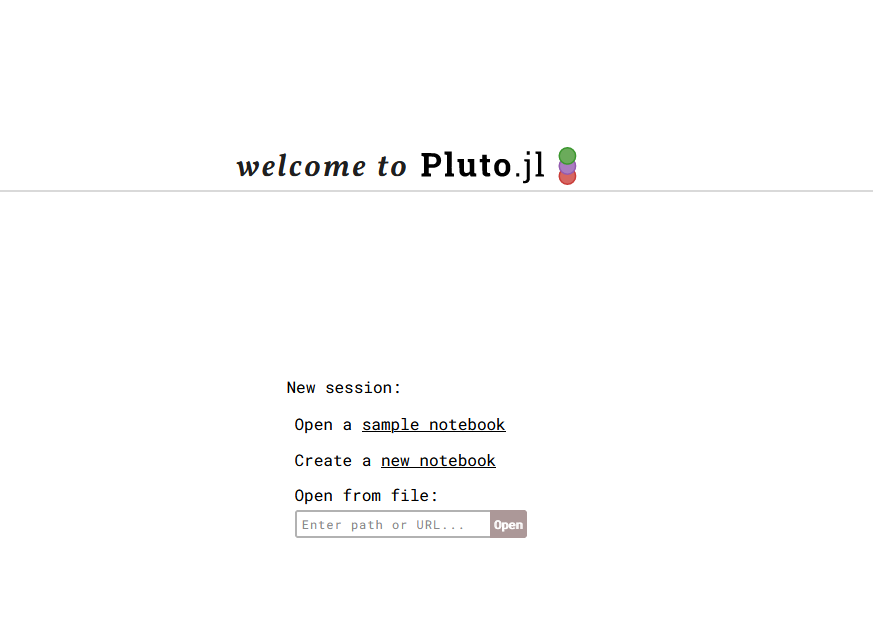 Download EasyChaos.jl from Github and then enter the path in Pluto below “Open from file:”. The notebook should look very much like the remainder of this post.

Pluto is a programming environment for Julia, designed to be interactive and helpful. Changes made anywhere in the notebook affect the entire notebook. Pluto is reactive so you don’t need to recalculate cells.

This is useful in studying chaos because small changes made to a function can have big effects. You can define a function, run it, and immediately see the effects.

The equation of a line is y=mx+b where m is the slope and b is the y−intercept. The slope is how much y changes for each unit change in x. For any starting point x if you move one step to the right to x+1, the new y−value becomes m(x+1)+b=mx+m+b. Subtract y=mx+b and all that’s left is m.

A step by 1 in the x−direction gives a change by m in the y−direction, which is the slope of the line.

If x=0, then y=m×0+b=b so the y−intercept is b. Since two points define a line, then start at b on the y−axis, move to x=1 and add m (or subtract m if m is negative) to get a second point. Draw your line through the two points.

The line can also be defined as a function,

Let’s start by plotting some lines.

We need a way to change the values of m and b. First, we’ll make a slider for the slope m and set the initial value to m=1. 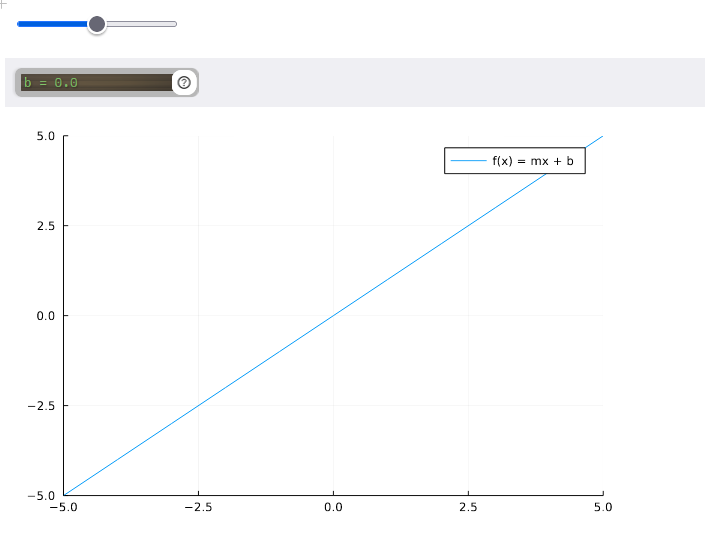 Notice that the origin of the plot is in the center. Move the sliders for m and b to get a new plot. Interesting, but not chaos.

Chaos is doing nearly the same thing over and over and expecting wildly different results. Let’s start with the linear equation above, with m=1 and b=−1.

Starting at x=1, the output of the function is y=0. Using this new value as the input, f(0)=−1. If you do this several times you get the uninteresting sequence

Instead of calculating x1​=mx0​+b and then x2​=mx1​+b and so on, we can do this in a function iter_f with inputs m,b,x0​,n where x0​ is the starting point, and n is the number of iterations.

Taking the difference between the outputs gives an uninteresting answer:

Now, let’s change the equation slightly to f(x)=2x−1, and use the same starting points as before.

The difference between these sequences is:

Multiply the differences by 10000 to make the changes more obvious:

Let’s write out several iterations of y=mx+b in terms of the starting point x0​.

What happens if we make a small change in x0​? If we change x0​ by a small amount, ϵ, then

So long as ∣m∣>1 then we can make mnϵ as big as we like by iterating enough times, no matter how small ϵ is. A small change to the initial value of x0​ produces as big a change as you like in the final value, xn​.

There you have it. Chaos! 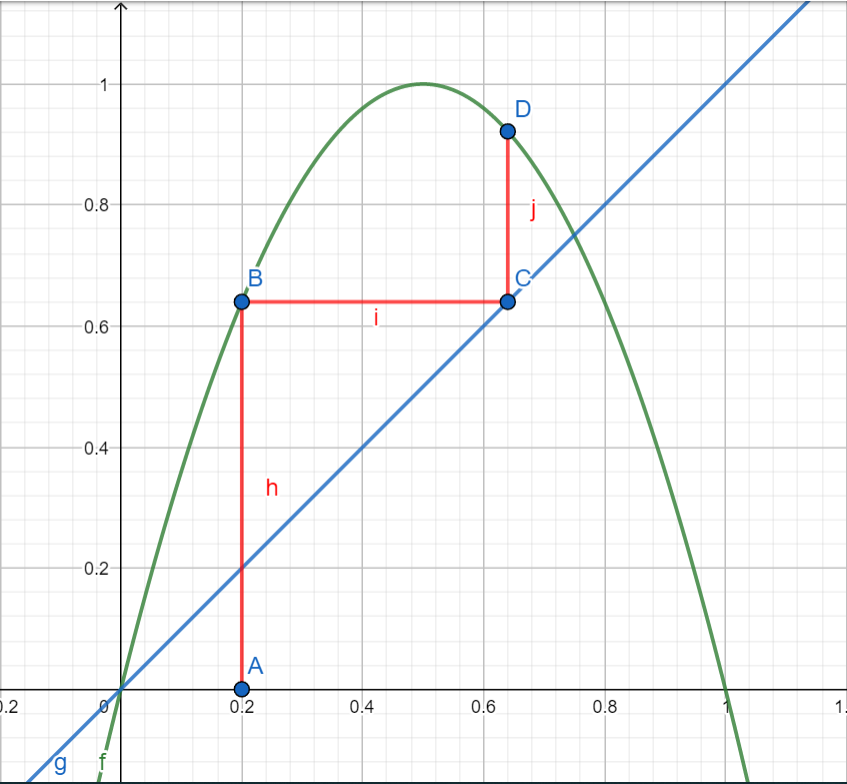 This process can be repeated as often as you like and will show the trajectory of the function F(x).

# An Iterator for the Logistic Function

Like the iter_f function above, we can write a Julia function to iterate the logistic function. The inputs will be the starting point, x0​, the constant c, and the number of iterations n with a default value of n=100.

This new function, iter_logistic will return the orbit, y.

Now we can plot the trajectory: 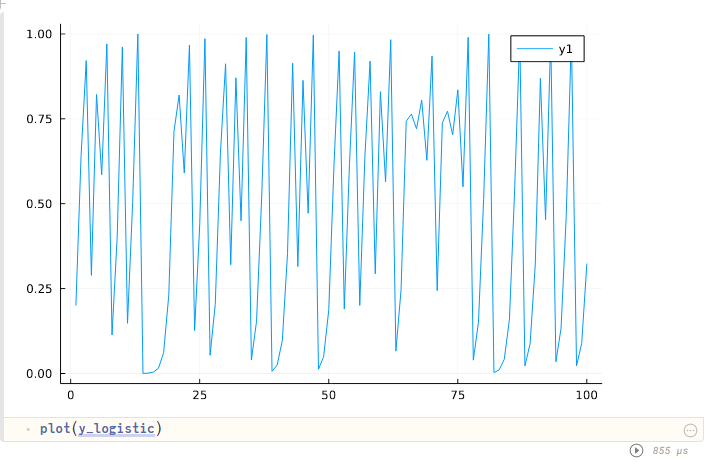 Try adjusting the value for c. When c=4 the plot seems pretty chaotic. What happens if you change x0​ from 0.2 to 0.19? This should show that the trajectory is sensitive to the initial value of x0​.

While the plot of the logistic function trajectory for c=4 appears chaotic, you might be able to convince yourself that there are repeating patterns. The repetitions are far from identical, but if you imagine making a copy of the plot and shifting it over a bit, it might line up.

Let’s start by plotting the autocorrelation of the iterated logistic function for different values of τ.

Rather than scrolling back up to set x0​ and c, let’s just create two new variables and call them xP and cP. 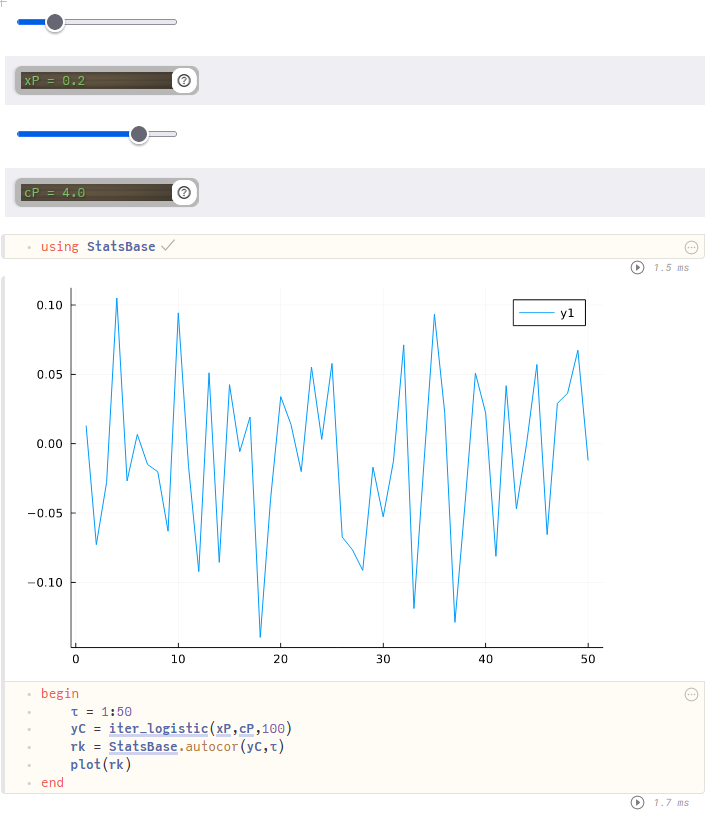 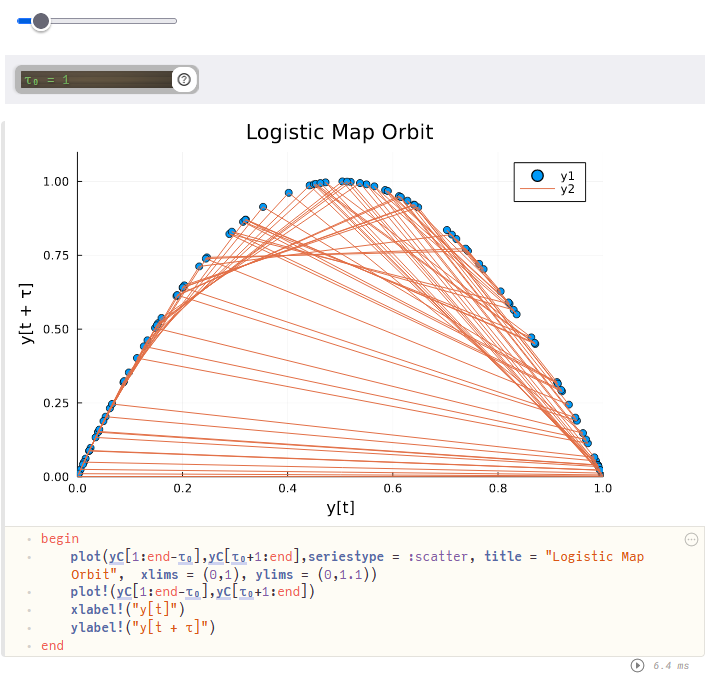 This should be expected since yn+1​=f(yn​) for every n.

Why choose τ0​=1? That choice of τ0​ plots the orbit of the function. The orange lines (y2) show which point follows the current location. On the left side, the path seems to be mostly upwards towards a nearby point. On the right, points are sent back to the left half except those near x=1.

Try setting τ0​=0 and you’ll see that the orbit becomes the line y=x, because there’s perfect correlation between y[t] and y[t+τ0​]. The plot doesn’t provide any insight. Try some other values of τ0​ to see what happens.

With Pluto, you can change the input values to a function to immediately see the effects.