Subtitle: HeuristicLab Solves Your Problems or: How To Do Physics Without All the Complicated Stuff

Have you always wanted to be a real physicist like Sheldon Cooper, but didn't want to spend a lot of time studying? Here's how you can move to the head of the class without cracking open a single textbook.

# The Most Famous Equation

Probably the best-known equation is Albert Einstein’s relationship between energy and matter,

It’s only got three letters, and the most complicated part is c2. Plot the equation and you’ll see that it’s just a straight line: 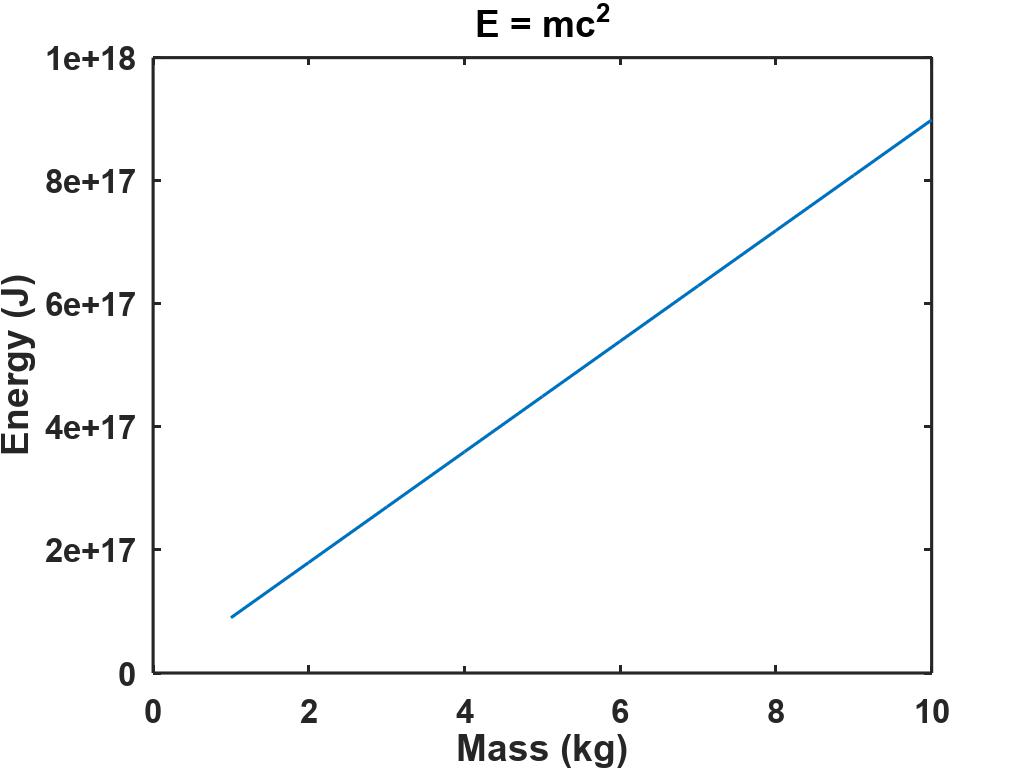 Other than realizing that energy is related to mass through the speed of light squared, you really phoned that one in, didn’t ya Al? 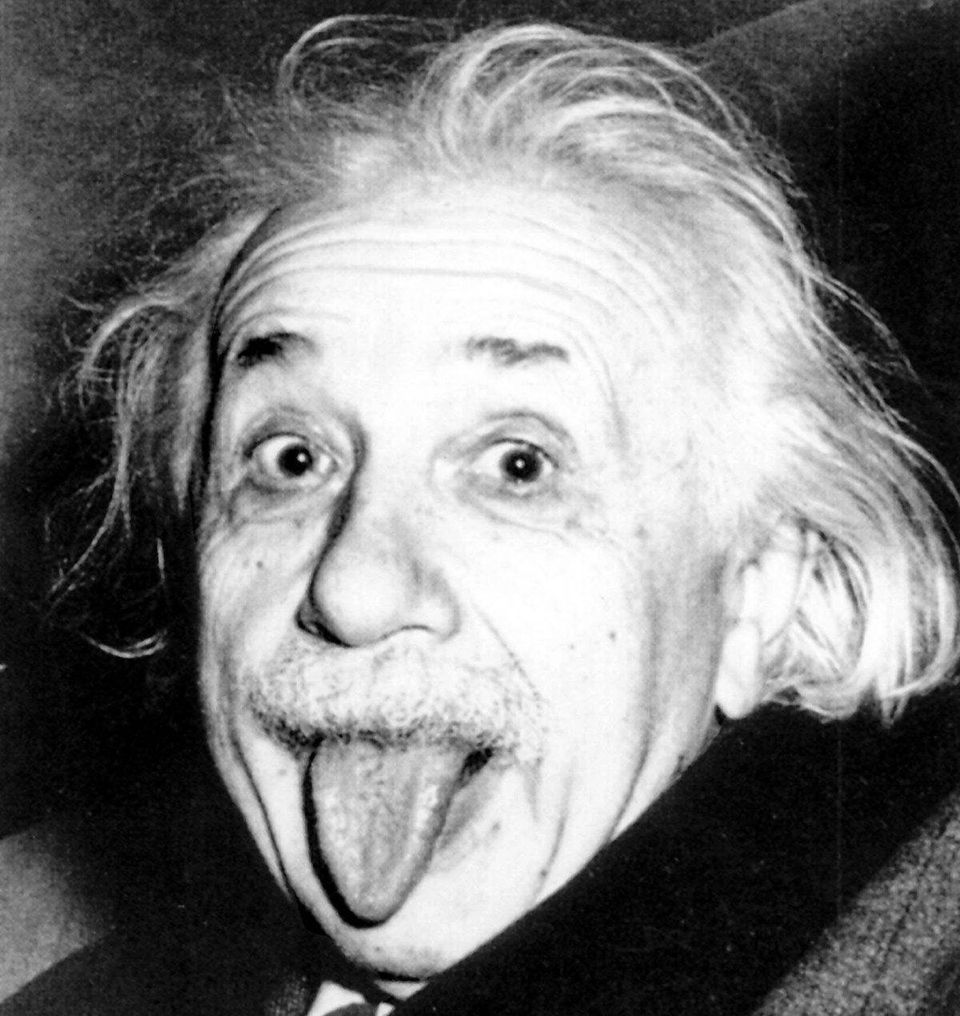 Usually, scientists don’t just think up the correct equation out of thin air. They collect data, test hypotheses, and fit equations to the data.

We need to have some data before making any hypotheses, and instead of building a miniature copy of the Cern Super Collider in the back yard, we’ll use Algodoo. Algodoo simulates basic physical properties, is easy to set up and learn, there are user-contributed examples and an active community.

A simple example of Algodoo’s capabilities is this inclined ramp with a ball. Hold the shift key down while drawing a polygon to get a ramp with straight edges, then add a circle. When you click the green arrow at the bottom of the screen the simulation starts and the ball rolls down. Reset the simulation by clicking the reset arrow just to the left of the start arrow.

On the right end of the control panel you’ll see three buttons. These buttons control gravity, atmospheric drag, and the last turns on the background grid. A dark-gray background indicates that the feature is turned on, so in this case, both gravity and drag are active.

I thought that a good first experiment would be to collect data for a falling ball, first without drag and then with atmospheric drag turned on. I created a circle (ball), dragged it up to 48m, and checked the physical properties by right-clicking the ball, and then clicking “Information”: 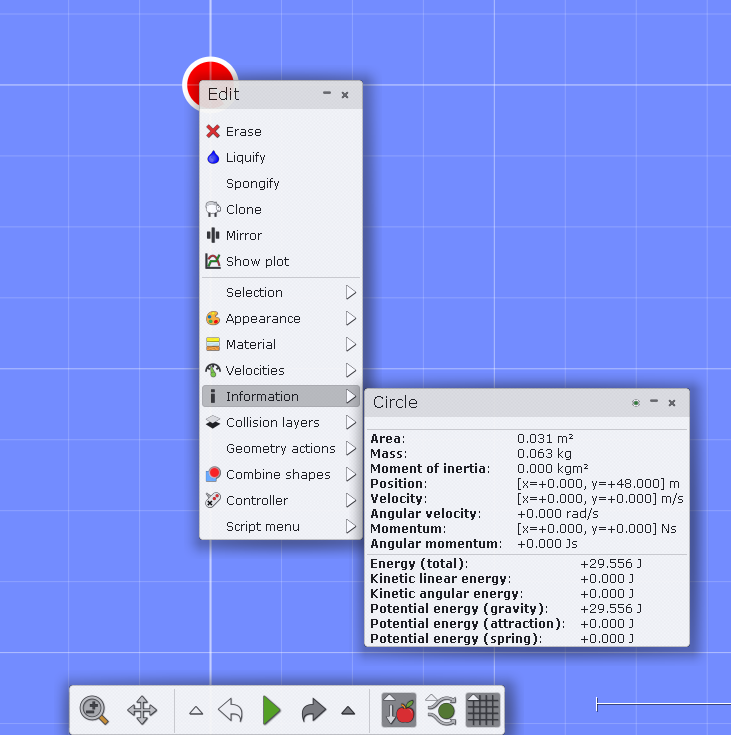 Notice that the drag has been turned off, but the grid is visible. Close the information window, and click on “Show plot” and run the simulation until the ball reaches the ground. It will bounce a few times, but you can stop it anytime after the first bounce. 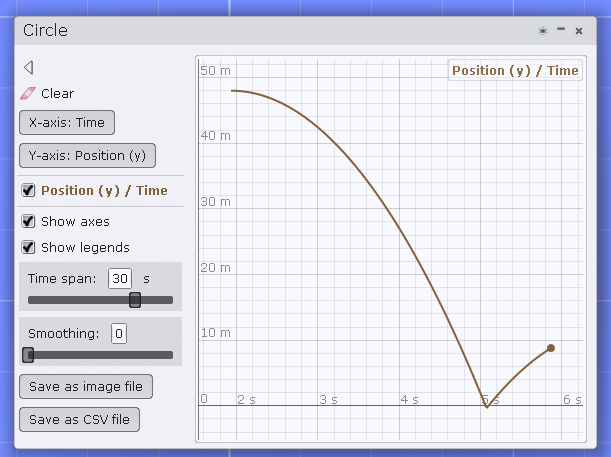 Click on the “Save as CSV file” button to save the data. Now we have some data, and it should be easy to see how well it fits the equation of an object falling under the influence of gravity only,

where y(t) is the height at time t, y0​=48m is the initial height, vy​=0sm​ is the initial velocity and g=9.80665s2m​ is the standard acceleration due to gravity. Here’s a plot generated in Octave of the data collected by Algodoo and the fitted positions: 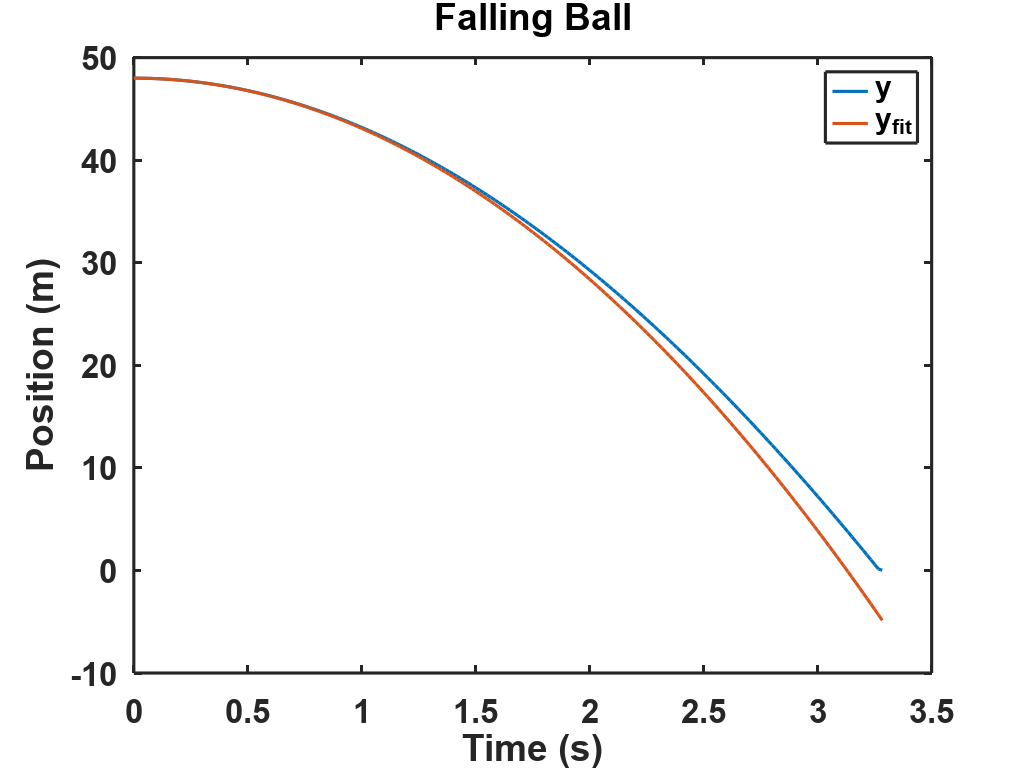 Something’s wrong! Drag is turned off, so that’s not it. Does Algodoo use a different gravitational acceleration constant? In the upper right corner of Algodoo, you’ll see a small box with three icons. The lowest one looks like a magnifying glass, and if you click on that, a dialog box will appear showing Forces, Velocities, and Momentums: 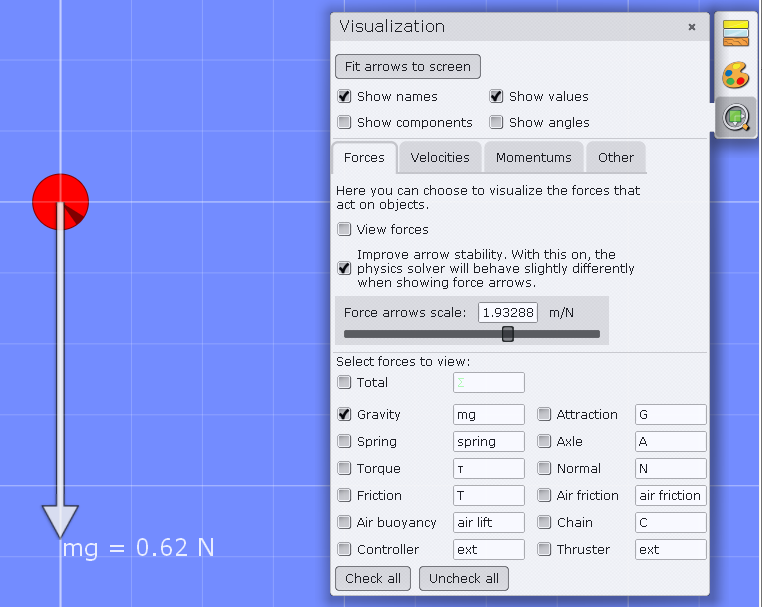 It’s different, but not enough to correct the error, and it could be that it’s due to round off error in the displayed force. In fact,

so rounding to two decimal places gives mg=0.62N as shown. Octave has a function called polyfit that fits a polynomial to data, giving the coefficients to our falling object function,

That’s soooo wrong! What is Algodoo doing? What is the actual equation being used to model the falling ball? To answer that we need to understand symbolic regression.

Symbolic regression is a method that finds the best fitting function to a dataset. Defining best is difficult, though, because we need to trade off simplicity for accuracy. Of all the functions that come close to fitting the data, should we choose the one with the fewest terms or the one that most closely approximates the y values? Before we get to that, we need to understand how symbolic regression works. 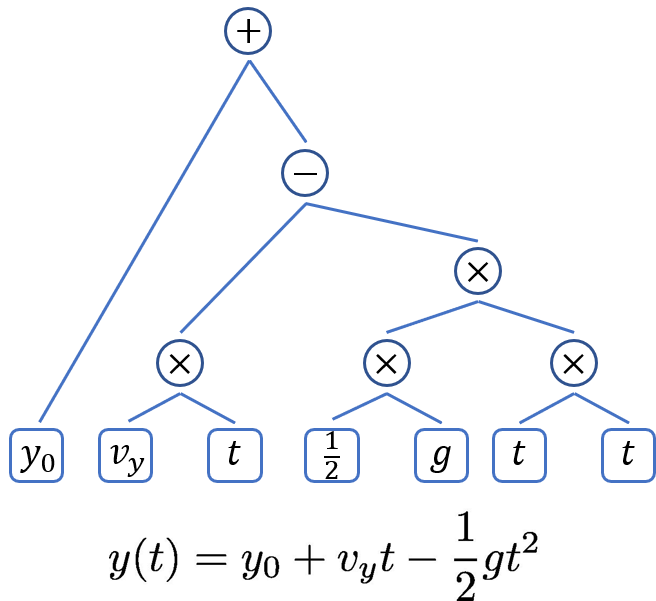 In the bottom right is t×t giving t2, and next to that is the constant 21​ multiplied by the gravitational constant g. To the left, vy​ and t are multiplied together to get the middle term. The acceleration term is subtracted from the velocity term using the minus operator, and finally, the initial position y0​ is added to complete the equation.

The way symbolic regression works is that the program generates hundreds of random expression trees like this and then combines them using a genetic algorithm. In a genetic algorithm, the population of expressions is paired off, the expression trees of each “parent” tree are snipped at some random point, and the snipped branches are swapped with the other parent to create two new offspring expressions. You might think of the expression as the DNA of an equation. Sheldon would say that the equations are having coitus.

The genetic algorithm chooses another equation to “mate” with the one shown above. It snips the “DNA” and swaps segments between the two expression trees. 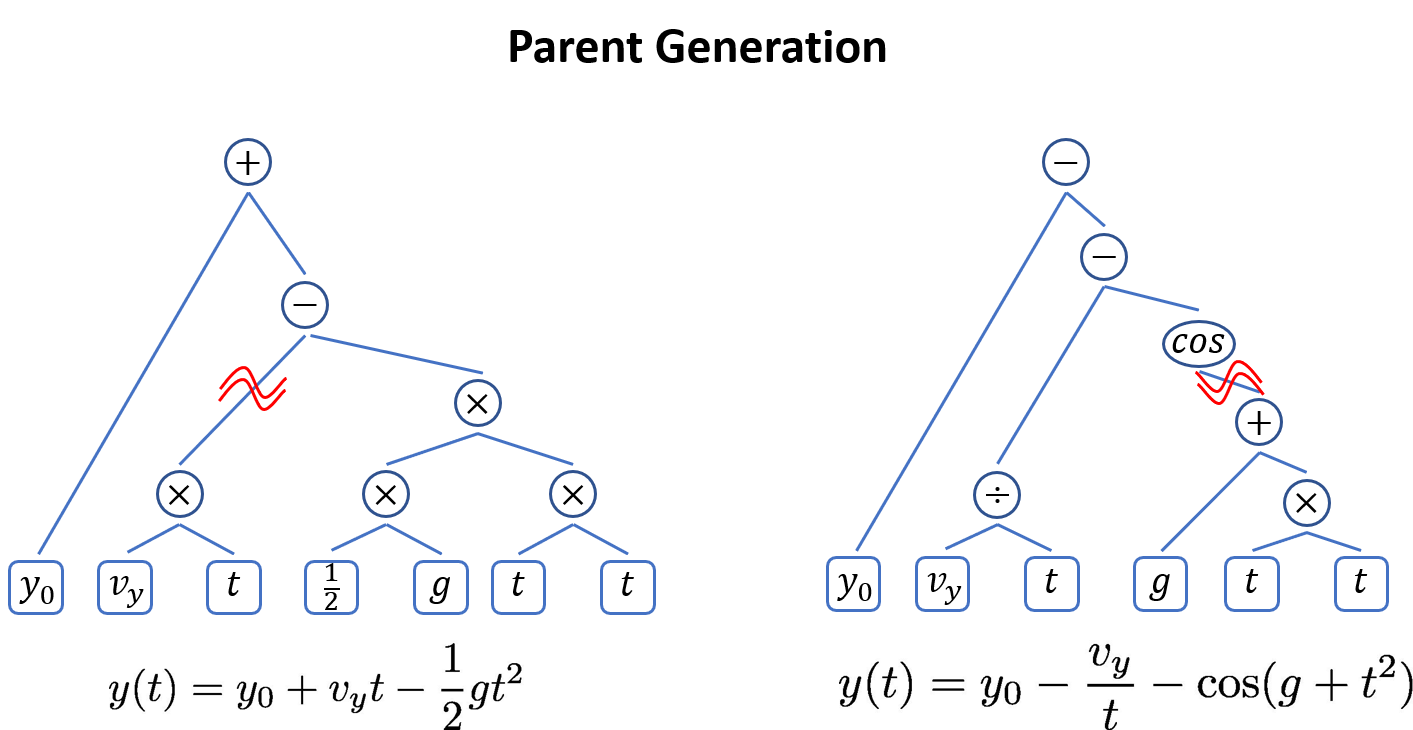 After swapping, the two new offspring equations are: 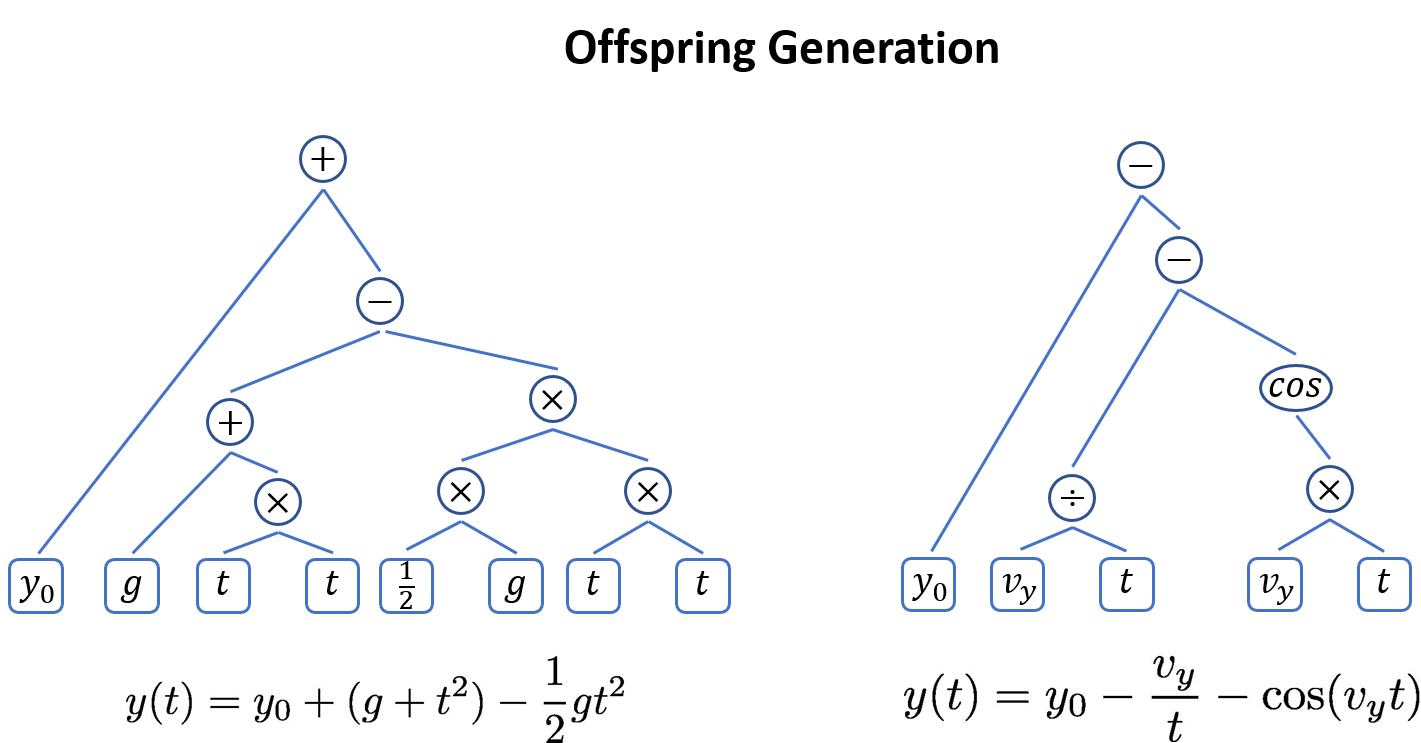 The two new equations are evaluated at each ti​ and compared to the data yi​ to see how well they fit. The algorithm might start with 1000 equations and generate another 1000 using this method. Each of the 2000 equations is evaluated at all times, and the top 1000 are kept for the next iteration. Amazingly, after a few hundred generations a good solution will often emerge.

Just as in nature, it’s useful to have random mutations. Every once in a while, a constant gets changed, or an operator is swapped out for some other randomly selected operator. Usually, this results in a poorer fit, and the offspring is discarded, but sometimes you get an improvement that’s worth keeping.

Writing a program to convert equations into tree expressions, and then handling all of the mechanics of the genetic algorithm is a lot of work. Fortunately, there are several open-source versions available. Dominic Searson wrote GPTips, which runs under Octave and Matlab. GPTips requires some coding to set up the model, but it works very well and you can select the model that gives good performance with minimal complexity.

TuringBot isn’t open-source, but there is a free version, and AI Feynman 2.0 had been released recently which runs under Python. I’ve used GPTips, but not TuringBot or AI Feynman 2.0, although both look promising. But for now we’ll use …

HeuristicLab has been in development at the Heuristic and Evolutionary Algorithms Laboratory (HEAL) for almost two decades and provides many genetic and machine learning algorithms in an easy-to-use GUI. From the About HeuristicLab page, “In HeuristicLab algorithms are represented as operator graphs and changing or rearranging operators can be done by drag-and-drop without actually writing code.” Tutorials are available on the Documentation page, and you should spend some time watching the short video describing Symbolic Regression with HeuristicLab which walks through an example problem.

Open the data files generated by Algodoo and find the last row before the ball bounces. Delete all of the data below the bounce and save the file. Start HeuristicLab, select and start the Optimizer, and double click “Genetic Programming – Symbolic Regression”. When the new tab opens click the file icon and select the data file. Change the target variable to “Position”. For now, leave the Training/Test slider at 66%/34%.

The default tree depth is 12, but this usually makes the fitted expression overly complicated. Try setting it to 6 to see if you can get a good fit. You can also change the tree grammar, that is, the operators available to the algorithm. Under the “Algorithm” tab, change the maximum number of generations and the population size, if you like. 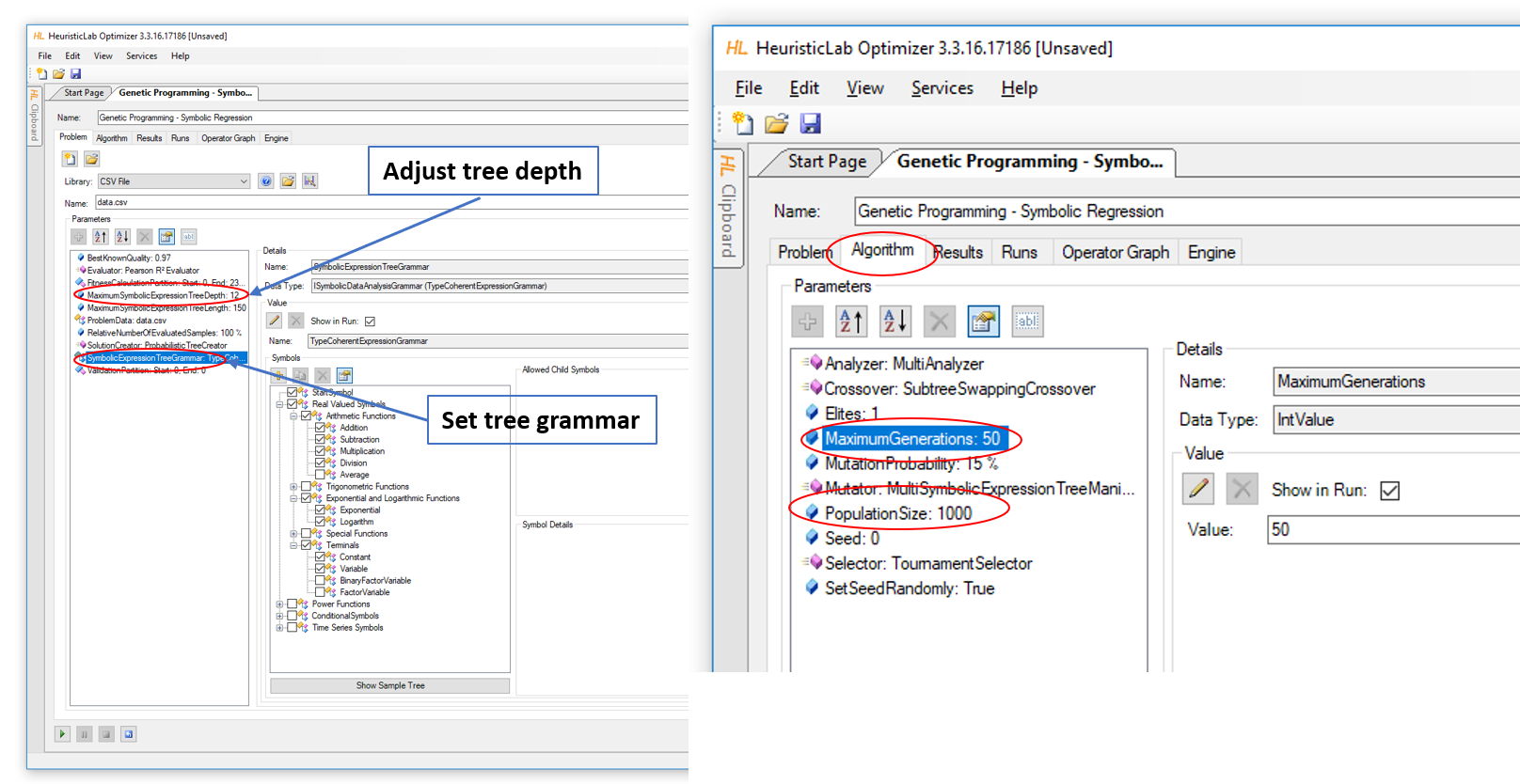 To start the symbolic regression, click on the green “Run” arrow in the bottom left corner. Switch to the “Results” tab, and select “Qualities” to watch the algorithm at work.

When the run has finished, click “Best Training Solution: SymbolicRegression” in the “Results” tab, and then double click “Model: Symbolic Regression Model”.

Click on “Test Samples” in the scatter plot to show the fit to both training and test data. You can simplify the model and optimize the parameters at this point. Watch the scatter plot as you make changes. If the scatter plot begins to deviate from the true values, you can undo simplifications.

HeuristicLab found this equation to best fit the data (right-click on the format icon for options): 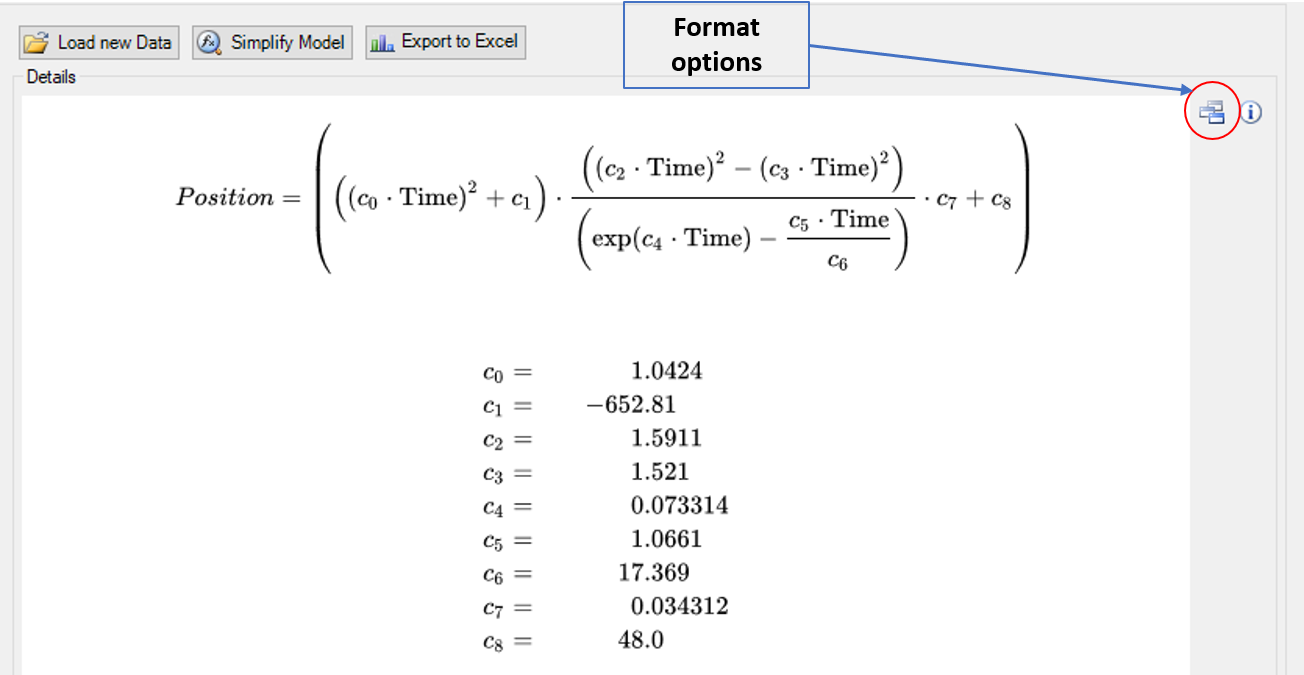 It’s a very good fit, R2=0.99997458780501536 on the test data, and probably would have been even better except that one test data point seems to be off the fit line. On the other hand, it’s a very complex model for something that should have been much simpler. Reducing the tree depth would help, and since the population equations are chosen randomly, new runs produce different equations.

It seems unlikely that the physics model in Algodoo uses the equation that HeuristicLab found, but the data from Algodoo doesn’t fit the gravity equation either. Maybe there’s a gravity parameter setting somewhere in Algodoo that I missed, and I never got around to including atmospheric drag. The experiment could be re-run using a different physics engine such as ReactPhysics3D, SimPhy, Project Chrono, FisicaLab, or Bullet Physics.

Of course, the real fun with any symbolic regression engine would be to discover something new. You would need to find an unsolved problem, run the data through until you got a good fit, and then re-run multiple times to see if a simpler equation emerges. It’s still up to you to figure out why the equation explains the phenomenon. Why are energy and matter related through the speed of light squared? Figuring that out makes for great science.