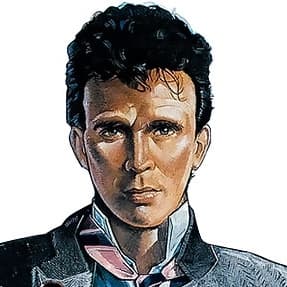 “No matter where you go, there you are.”
— Buckaroo Banzai

In chaos theory, an orbit is the sequence generated by repeatedly applying a function f to the initial point x0​.

The previous post, Easy Chaos with Pluto showed how to run a Pluto notebook in Julia. A more in-depth introduction is on the MIT open course Introduction to Computational Thinking which describes the first-time setup of Julia and Pluto and provides a Cheatsheets page.

# The Discrete and the Continuous

Chaotic orbits may be either discrete or continuous. In the previous post Easy Chaos with Pluto the logistic function 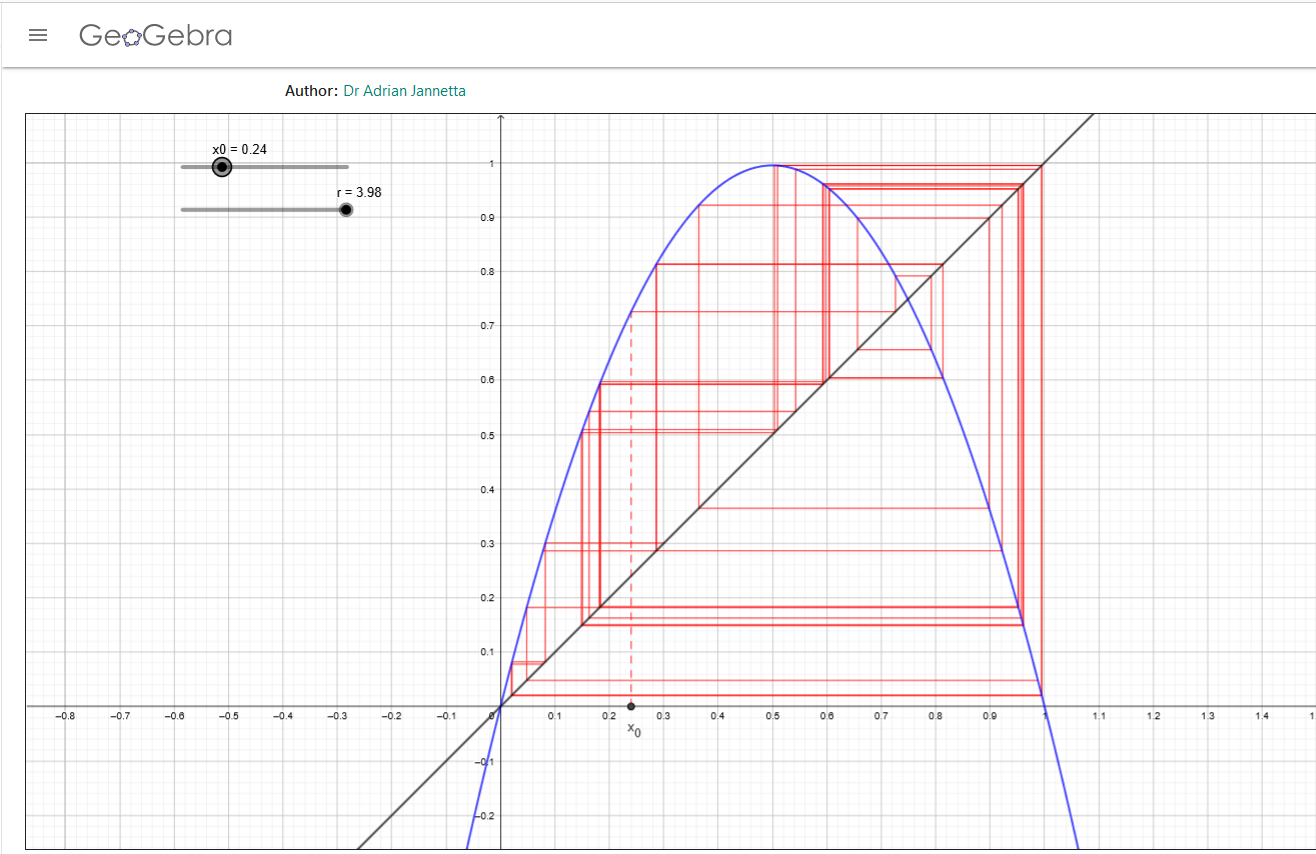 Continuous functions are often written in terms of time, such as the Van der Pol equation

Pick any point P=(x,y). The notation x˙ and y˙​ are the derivatives of x and y which tells you how fast point P is moving. Suppose P=(1,3). Putting those coordinates into the Van der Pol equation gives

which says that the point P is moving to the right with velocity 3, and the y velocity is zero. The time variable t doesn’t seem to show up, but (x˙,y˙​) is the velocity of P which is a function of time. In some cases, you may see the notation x˙=dtdx​ or y˙​=dtdy​ indicating that velocities are functions of time. The ratio gives the slope m of the velocity,

Starting at point P0​, the velocity is v=(x˙,y˙​), so for some small time step Δt the next position would be P1​=P0​+Δt(x˙,y˙​). The time step can be as small as you like making the trajectory, or orbit, of P0​ a continuous function.

It isn’t too difficult to generate the sequence of points in the orbit of the logistic function, but for the Van der Pol equation the velocity changes with every small time step, so keeping track of the orbit points becomes tedious. Fortunately, computers can handle these kinds of equations and plot the orbits for us.

Orbits are chaotic if they have the following three properties:

One way to think about these properties is to imagine a car race. At the start they all have slightly different initial conditions. Some engines will be stronger than others, some drivers better than others, and only one car gets the pole position. Each car occupies a slightly different position on the track. These slight differences are the sensitive dependence on initial conditions that will determine the outcome of the race.

When the race starts the cars move down the track and begin to separate, each one completing laps at slightly different times than the others, and the paths that they take may be similar, but each car creates its own path. After enough time, the leaders will begin to lap the stragglers, and even though the cars separated at the start, they’re now back together, which is a little like topological transitivity.

The mathematical definition of topological transitivity says that for any two regions U and V in the orbit, there is some positive integer n such that some of the iterated points in U, or fn(U) can be found in V. This holds no matter how small the regions U and V are, and no matter where they are in the orbit.

A consequence of topological transitivity is that an orbit is never two or more independent orbits. Even if the orbit appears to have distinct branches, eventually points in one branch will iterate into every other branch. 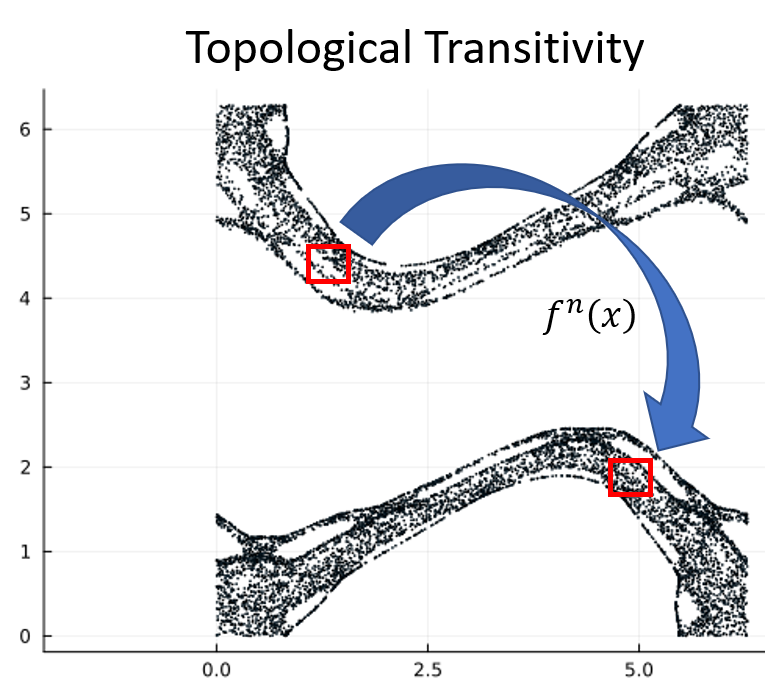 A periodic orbit is one where fn(x0​)=x0​, so x0​ comes back to itself after n iterations of f. The cars go around the track and return to the points where they started. The analogy with race cars isn’t quite accurate because the lateral position on the track changes from lap to lap, but maybe you can imagine the propagation of points to be a little like a car race. Dense periodic orbits mean that at any point in the orbit of one point, you can always find the orbit of another point nearby.

These three properties of chaos were first described by Robert L. Devaney in his book, An Introduction to Chaotic Dynamical Systems. A popular non-mathematical book, Chaos: Making a New Science was published by James Gleick in 1987. Wolfram MathWorld says this about the definition of chaos,

Gleick notes that “No one [of the chaos scientists he interviewed] could quite agree on [a definition of] the word itself,” and so instead gives descriptions from a number of practitioners in the field. For example, he quotes Philip Holmes (apparently defining “chaotic”) as, “The complicated aperiodic attracting orbits of certain, usually low-dimensional dynamical systems.” Similarly, he quotes Bai-Lin Hao describing chaos (roughly) as “a kind of order without periodicity.”

Chaotic systems are deterministic which means there is no random component to an orbit. Given a starting position, in principle, you can calculate exactly where a point will be n steps into the future for any value of n. What makes them seem random is that two nearby starting points evolve in unpredictable ways.

The Orbits.jl notebook lets you experiment with both discrete and continuous dynamical systems using both built-in equations and systems you can write yourself. Using a built-in method is as simple as loading the dynamical system rule:

and plotting the result 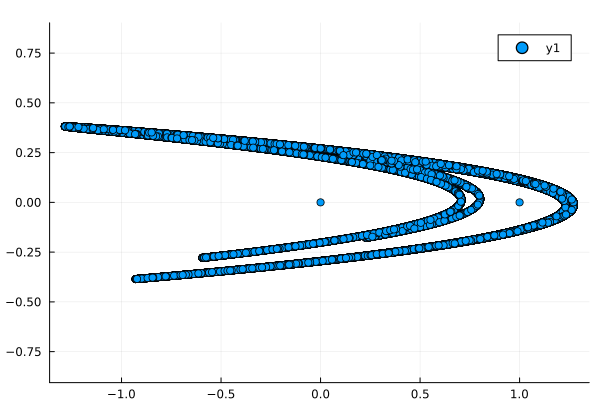 The equations for the Hénon Map are

which could have been written in Julia as

After setting the initial condition u and the parameter vector p, we could generate the trajectory and plot it just as we did with the built-in version. The rule requires a step counter n for discrete systems, or a time t for continuous systems even if these variables don’t show up in the equations.

The Orbits.jl notebook is fully documented so you should be able to change parameters and extend equations or even create new systems. Have fun experimenting!